The Biggest Book of Games for One Ever!
Over 500 Games of Luck, Skill and Patience for Players of a Solitary Disposition 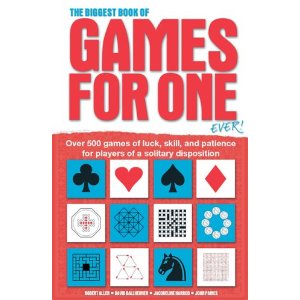 A pack of playing cards usually suggests friends gathered around a card table. But what can you do when you have a deck of cards, a wish to play, and nobody to play with? Author Robert Allen has the answer in this unusual book that presents rules and variations for 100 different fascinating and challenging solitaire card games—but there's still more! You'll also find approximately 400 coin games, matchstick puzzles, logic puzzles, crosswords, and memory games. The solitaire games include Roll-Call, Pyramid, Canfield, Grandfather Clock, and Flower Garden, to name just a few. Some games—both solitaire and non-card games—take only a few minutes to play, while others can go on for much longer. Each game is described with detailed diagrams, easy-to-follow rules, and the game's object clearly defined. Here's a book to help readers make an hour or two of solitude pass rapidly and entertainingly!

From the Back Cover

Frustrated by the refusal of family members to join in a game?
Infuriated by conniving friends who insist on cheating?
Exasperated by fellow players who don’t know the rules?

The solution is now at hand for players of an independent frame of mind. Packed with a huge collection of puzzles and games that don’t require the involvement of any slackers, tricksters, or dullards, The Biggest Book of Games for One Ever! provides hours of fun and entertainment for the gaming purist.

It’s just you and Lady Luck pitted together!